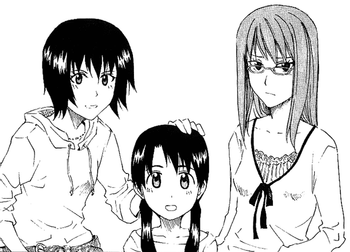 Shiho, Yuuri and Karuna.
Idol no Akahon is a short Shōnen manga by Ujiie Tozen, later known for Seitokai Yakuindomo. It was serialized for 20 chapters from June to November 2006 in Weekly Shonen Magazine.
Advertisement:

A small talent agency accidentally books three aspiring Idol Singers at the same time. With only one manager avaliable, they're put together as a group and get the name Triple Booking.

Tropes associated with Idol no Akahon include: