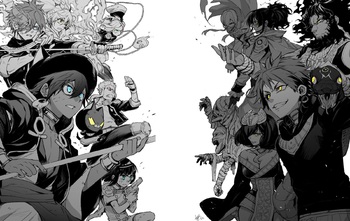 Im: Great Priest Imhotep (Im～イム～ for short) is a shonen manga created by Morishita Makoto, which was serialized in Shonen Gangan from 2015 to 2018 and compiled into 11 volumes. The manga is licensed in English by Yen Press.

The story revolves around a young Egyptian priest named Imhotep, who lived a solitary live back in ancient Egypt 3.000 years in the past until tragic and traumatic events cause him to be banished unto the future; our present day. Now, stuck in this present day, he is forced to end the reign of the terrible king of the Magai and his former best friend, Djoser. But that's easier said then done, if that terrible king of those horrific monsters is your first and very best friend.

In his journey, Imhotep meets many different people, including a girl named Hinome who had been living a solitary life as well until meeting him. At first, they clash, but soon enough grow to care deeply for one another as chaotic event after chaotic event transpires. They're the best of friends, you could say. And that, perhaps, makes a certain king quite jealous...