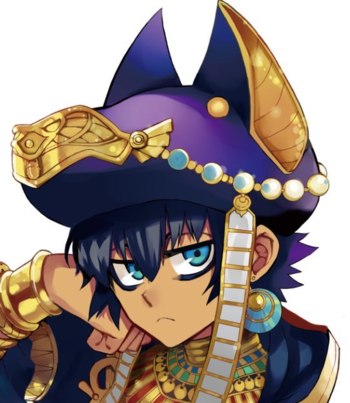 The Hero, a high priest from Ancient Egypt. He's remembered as the Great Heretic who desecrated the creator gods and unleashed a horrible calamity upon the world. After being sealed for millennia, he was revived to rectify his sin by stopping the magai wherever they appear. As part of his mission, he traveled to Japan in pursuit of the false gods. 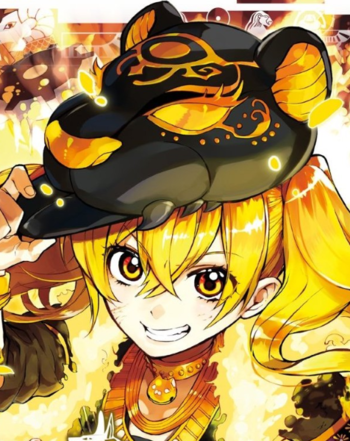 The Heroine, a Japanese teenager possessed by a magai. Due to her family's occult reputation and voice sparking uncontrollable flames, she silently isolated herself from everyone for much of her childhood. But following a chance encounter with Imhotep, she was finally exorcised of her curse only to end up repeatedly drawn into the boy priest's conflicts with the magai. Despite her initial reluctance, she becomes his closest ally.

The Series Mascot, an Anubis puppy and god of mummy-making. After being sent by the Amen Priesthood to monitor Imhotep, he becomes the priest's apprentice. He dreams of one day becoming a proper god. 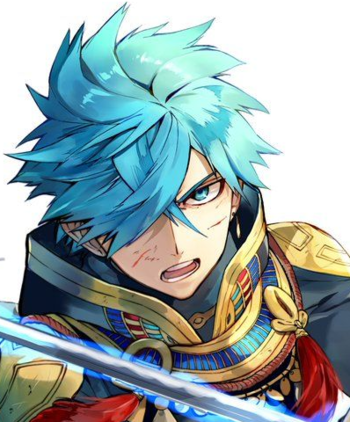 The Rival, a young member of the Amen Priesthood Japan Chapter. He joined the organization after his family was slaughtered by a magai it enshrined, developing a zealous hatred for the sham gods and anyone related to them. He grew to be an excellent fighter but always isolated himself from his colleagues. In spite of his past grudge and anger issues, he cooperates with Imhotep as per the Priesthood's directive. 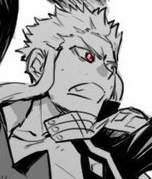 A young member of the Amen Priesthood Japan Chapter. Adopted by the chapter chief Yata after his family was killed by magai, he grew up to become a priest for the branch. He was later teamed up with Harugo and Imhotep.

A new member of the Amen Priesthood Japan Chapter. Adopted by the chapter chief Yata after her family was killed by magai, she recently became a priest for the branch. She was later teamed up with Harugo and Imhotep. 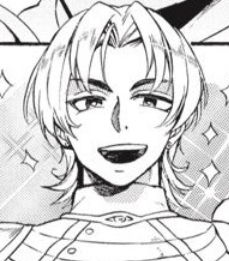 A ranking high priest of the Amen Priesthood Egypt Chapter. Flanked by his bodyguards Lato and Sed, he's assigned as Imhotep's overseer during his time free of the seal. 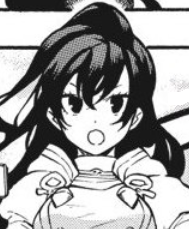 A high priest of the Amen Priesthood, one of Khonsu's bodyguards. Serving as his right-hand woman, she helps the fellow high priest with a variety of tasks. 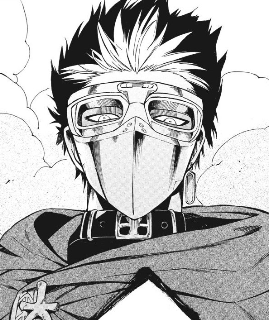 A priest of the Amen Priesthood, one of Khonsu's bodyguards. Serving as his eyes and ears, he helps the high priest with intelligence and espionage. 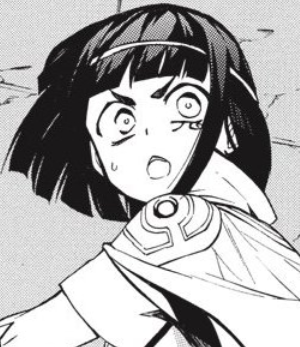 A high priest of the Amen Priesthood's Egypt Chapter and youngest child of House Osiris. Khonsu assigned him as Imhotep and co.'s guide and support during their stay in Egypt. 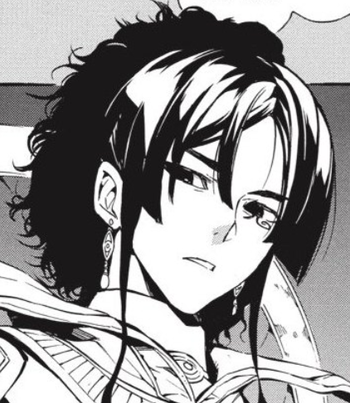 The eldest son of House Osiris. 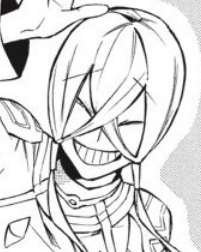 Ausir's childhood friend and chief subordinate. Serving as his right-hand man, he helps carry out the prestigious high priest's plans. 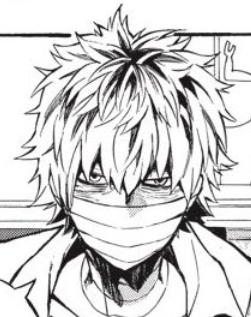 The chief medical doctor of Per-Ankh operating from the Amen Priest Capital. As a specialist with Ka, he spearheads the research and operation on priests' spirits. 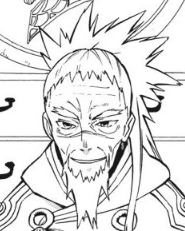 The chief of the Amen Priesthood Japan Chapter and leader of the Crow's Brood. Over the years as chapter chief, he took in numerous children victimized by magai or their worshipers, leading those who went on to be priests themselves.

Church of the Magai 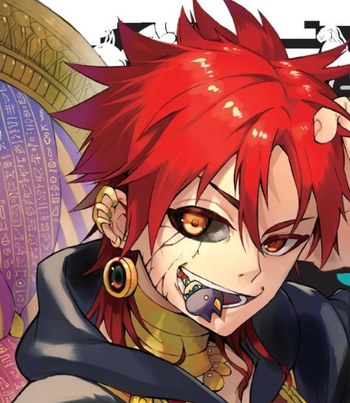 The Big Bad, Pharaoh of the Magai. Originally a Prince of Ancient Egypt, he befriended Imhotep despite the ongoing feud between the royal family and Amen priesthood, becoming his first and closest friend. Though he dreamed of becoming Pharaoh and ending the feud, he was instead sacrificed to stop the miasma from Hell's Gate. When the ritual failed due to Imhotep's meddling, the vengeful Prince was reborn and became leader of the fake gods freed from Hell. 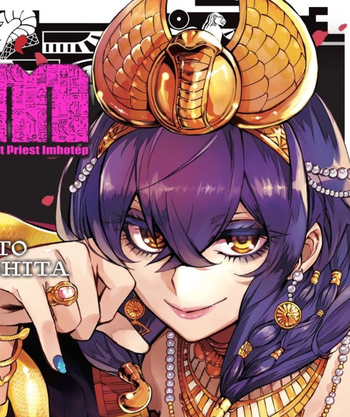 The Dark Chick, last Pharaoh of Egypt. After dying failing to conquer the world, she's resurrected by Djoser as one of his servants. With the promise of becoming Queen of his new world empire, she faithfully serves his efforts to destroy the Amen Priesthood with the magai. 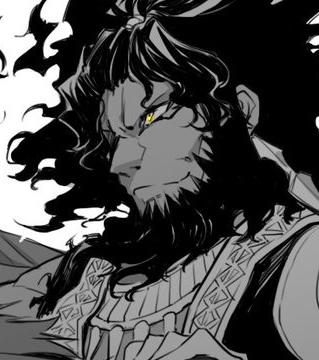 The Brute, Egypt's greatest and longest-living Pharaoh. Long after his death, he's resurrected by Djoser as one of his servants. Pitying the poor prince, he agrees to aid his plans for destruction and domination. 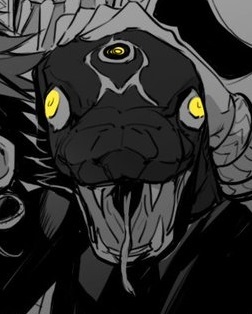 The Greater-Scope Villain, the embodiment of chaos that came from darkness, and the source of all negativity in the world. The gods trapped him in the Underworld to end their daily battle with the serpent, but he was accidentally freed by Imhotep. He's now possessing and acting through Djoser. 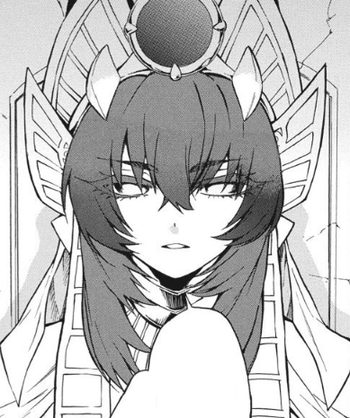 First of the Ennead, deity of creation and the sun. He leads them in their mission to extinguish the magai. 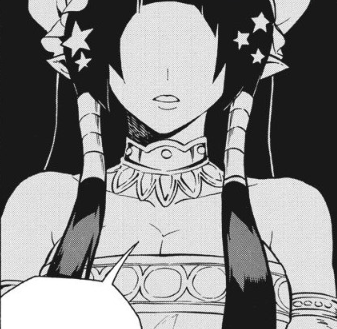 Seventh god of the Ennead. 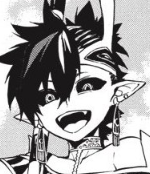 Eighth god of the Ennead, deity of storms and destruction who rules over barren deserts, chaos, disaster, and stormy weather. 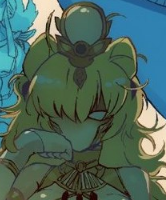 Third god of the Ennead, goddess of moisture. 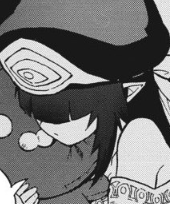 Ninth god of the Ennead, goddess of night. 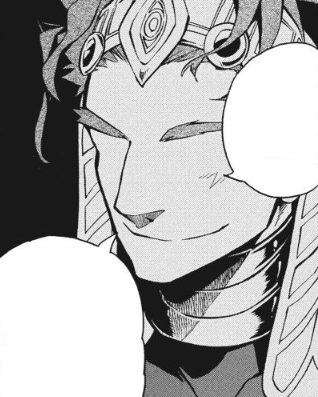 Fourth god of the Ennead, god of earth. 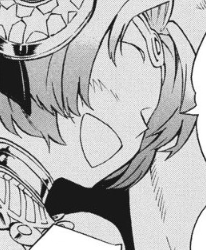 Fifth god of the Ennead, goddess of the sky.

Second god of the Ennead, god of air. 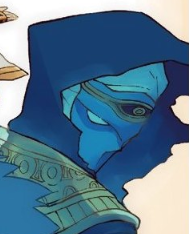 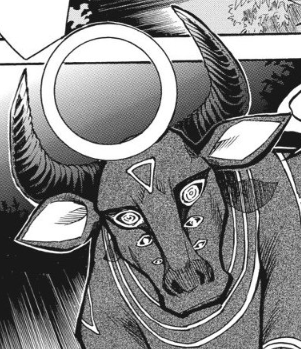 The Reality Warper Magai. Without any apparent anchor, he hid in the local forest in Japan to devour the souls of those who'd enter. 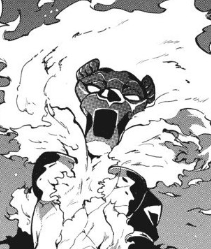 The Inferno Magai. She anchored herself to Hinome's garden-in-a-box and cursed her with a destructive fire breath for eight years, hoping to rampage to her heart's content. 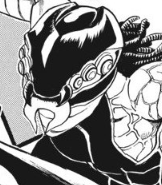 The Hallucination Venom Magai. He took residence in the tree growing in the old abandoned schoolhouse at Hinome's high school, hoping to feast upon the entire student body. 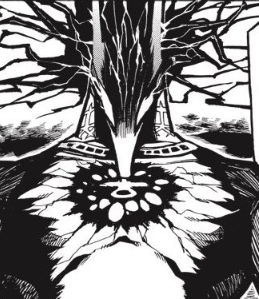 A magai sealed in a sword at Misora Shrine. After being sealed away by Seiten Misora, the magai was worshiped by the Misora family from its anchor for generations. After it stopped offering him human sacrifices, the magai eventually broke free and possessed the family head and slaughtered nearly the whole clan.