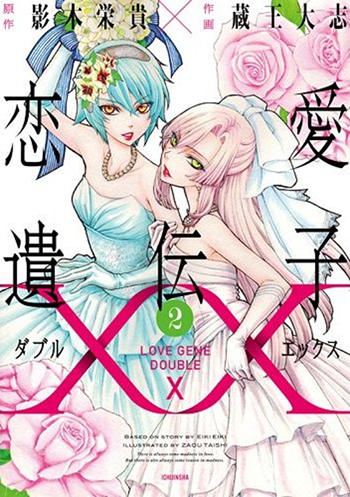 In the 21st century, humanity was hit by a virus that affected male chromosomes, causing all babies to be born female. In 2122, the last man on Earth died, and the now all-female world adopted the "Eden Project", under which half of the planet's population would carry out traditional masculine gender roles as "Adams", while the rest would continue to bear children as "Eves". In 2160, an Adam named Aoi Koshiro enrolls at the prestigious Kingdom Academy with an express goal of becoming its top student—a position currently occupied by Sakura Kokonoe, a ridiculously attractive and successful Adam from a privileged and rich family. Before long, however, Aoi's rivalry with Sakura gives way to feelings he cannot quite comprehend.

Love Gene XX (a.k.a. Love DNA XX and Renai Idenshi XX) is a Yuri Genre manga that ran in Yuri Hime between 2009 and 2013. It was written by Eiki Eiki and illustrated by Taishi Zaou—a duo best known for their Boys' Love works (and Haru Natsu Aki Fuyu)—and is, as a result, a rather unique blend of yuri and yaoi tropes that profoundly challenges the concept of traditional gender roles in a patriarchal society.

Note: Because Adams are referred with masculine pronouns in the original Japanese, the same convention will be used in the following article.