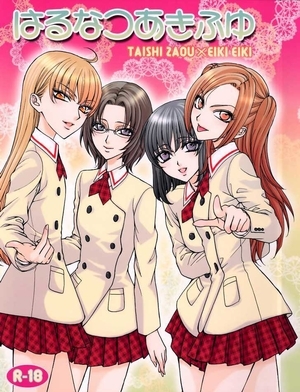 Haru Natsu Aki Fuyu is a Yuri manga written by Eiki Eiki and illustrated Zaou Taishi, a duo best known for their (many, many) Yaoi mangas. The story is set in St. Teresa's school for girls and consists of five individual stories focusing mostly on the growing romance between two pairs of schoolgirls, although one story focuses on the adults and another, on two unrelated girls.

There's some focus on lesbianism.

The stories, in order, are:

Not to be confused with Kat and Ana's theme from the original WarioWare game.