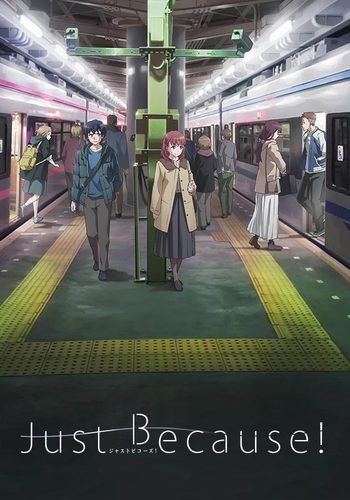 Just Because! is a 2017 Japanese anime television series by Hajime Kamoshida, the author of The Pet Girl of Sakurasou and Rascal Does Not Dream of Bunny Girl Senpai, and Kiseki Himura, the author of Getsuyoubi no Tawawa. The 12-episode anime, produced by Pine Jam, aired between October and December 2017.

It is winter of their third year of high school, near the end of second semester, when students have very little time in high school left. Everyone is just waiting for graduation. Until Eita Izumi—their classmate in middle school who had moved far away—suddenly moves back home at a peculiar time. This reunites them, as if a go signal rang out to the feelings of the students who had just thought their high school life would end without fanfare.

The project was first teased as an April's Fools joke in 2017 under title April 1st The Animation. It was later confirmed as real in the June issue of Gakken's Megami Magazine.

Kiseki Himura designed the characters, Atsushi Kobayashi directed the series with screenplay by Hajime Kamoshida. Hiroyuki Yoshii adapted Kiseki's art into animation. Keisuke Fukunaga produced the series. Pine Jam produced the animation. It aired from October 5 to December 28, 2017 on AT-X, Tokyo MX, TV Kanagawa, MBS, and BS Fuji's programming block Anime Guild. Nagi Yanagi served as music producer as well performed the opening theme titled "Over and Over", while Karin Isobe, Yuna Yoshino, and Lynn performed the ending theme "behind". Sentai Filmworks has licensed the series and streamed it on Amazon's Anime Strike service in the US. Sentai released the series for home video with an English dub on February 12, 2019.

Tropes associated with Just Because!