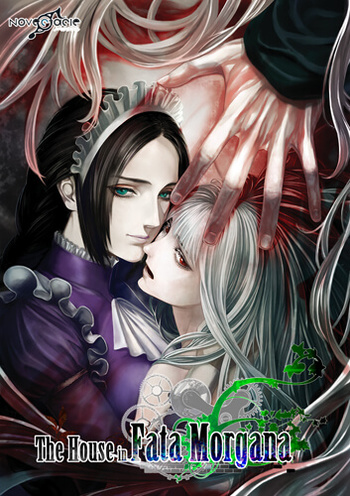 The House in Fata Morgana is a Visual Novel that was released in Japan on December 27, 2012. Mangagamer released an English version on their store

A prequel called A Requiem for Innocence was scheduled to be localized in 2016, but was delayed to 2018, and ultimately released May 18, 2018. It follows a band of rebels from the Middle Ages as they rise up against the maniacal Lord Jean-François Barnier, and serves as a Start of Darkness for several major villains in the original VN.

A short story titled Our Home was released on the official japanese website, and takes place during A Requiem for Innocence's epilogue, but is narrated through another point of view. You can find a translated version of that epilogue here

Compare to The Letter, another horror VN about a cursed mansion and several characters who are connected to it.

Due to the nature of its story, all spoilers are unmarked for the main game and its prequel, as it is practically impossible to discuss the plot without spoiling the whole thing. If you are the type of reader who is bothered by them, do not read any further than this before playing the game. You Have Been Warned!

The House in Fata Morgana contains examples of: