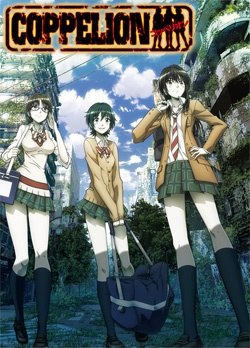 In 2016, a catastrophe occurs after a nuclear meltdown from the nearby Odaiba nuclear power plant contaminates Tokyo, forcing the government to order its citizens to evacuate. 20 years later, Tokyo has become a ghost town due to the high levels of radiation which the government has banned entry for anyone. When a distress signal is received from Tokyo, the Japan Ground Self-Defense Force dispatches 3 teenage girls from the Dispatch 3 Special Force Coppelion. Due to genetic engineering, the Coppelions are immune to radiation while also possessing special skills. Thus the Coppelions journey to the ruined capital to find survivors.

Coppelion is a seinen manga by Tomonori Inoue, which was serialized from 2008 to 2016 (starting out in Weekly Young Magazine, but it moved to Monthly Young Magazine in 2012). An anime adaptation by Go Hands aired in Fall 2013 and is simulcasted in English subtitles by Animax in Asia, Viz Media in North America, and Madman Entertainment in Australia and New Zealand.

Not to be confused with the ballet Coppelia. Though the name was inspired by the ballet.