Literature / Legacy of the Dragokin 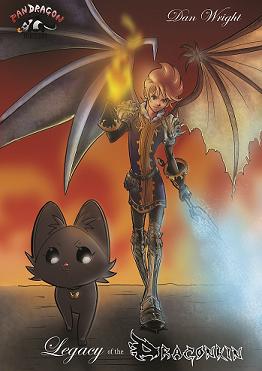 Just over ten years have passed since the Invasion of the Baalarian Empire and Draconica has returned to a natural state of peace – although the wounds left from it still linger with a few countries.

Benji Dragonkin aspires to be a hero, just like his mother – Queen Daniar Dragonkin. He wants to become a famous warrior so that he can save the day – and win the heart of his long time friend, Lydia Taurok. But with his mother being overly protective of him, and a dark side to his father that threatens to tear their family apart, Benji has a long way to go just yet.

Zarracka Dragonkin, still a prisoner of Daniar, plots her revenge against her sister – and Benji may just be the key to her victory.

And in the land of Drewghaven, the Kthonian Knights arise once more, determined to once again bring forth their revenge against the men of the world. Their leader, Jihadain, seeks to settle old scores with Daniar – and break her spirit in the process.

With villains gathering and allies faltering, Benji sees this as a chance to prove himself a true warrior. But even more harrowing is a warning that his mother receives, foreshadowing a greater evil:

Legacy of the Dragokin is the second book set in the world of Draconica and the sequel to Trapped on Draconica. The two of them will share a character sheet except for the ones introduced in this book.

Legacy of the Dragokin contains these tropes