Manga / My Wife is a High School Girl 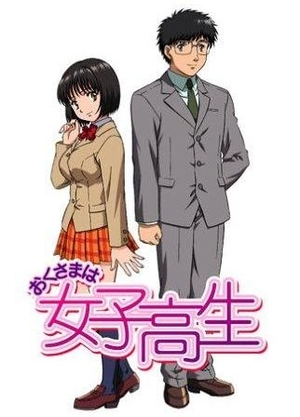 My Wife is a High School Girl (Oku-sama wa Joshi Kōsei) is a Seinen Manga series created by Hiyoko Kobayashi and published by Shueisha in their publication magazine Young Jump. The Manga ran from 2002 to March 2007 and compiled thirteen volumes over its run.

Asami Onohara, a seventeen-year old high-school student, is married to Kyosuke Ichimaru, her physics teacher. However, even though they are officially a married couple, Asami's father forbids them to have any sexual contact until after Asami has graduated. The story involves the hiding of the relationship from people; specifically those of the high school, while the couple face opposition to the relationship on behalf of Asami's father and third parties.

Another adaptation came in the form of an anime, produced by studio Madhouse under director Jun Shishido. The show's original run was on the TV Saitama network between July 2nd, 2005 and September 24th, 2005, with 13 episodes produced.

Not to be confused with the similarly named, My Wife is the Student Council President.

Alternative Title(s): My Wife Is A High School Girl