Western Animation / My Life Me 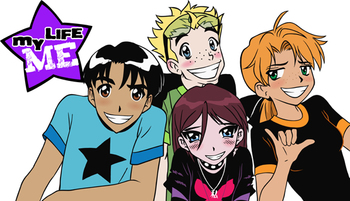 My Life Me is a Canadian/French animated series from the Quebec-based studio CarpeDiem Film & TV inc. that was created by JC Little, Cindy Filipenko and Svetlana Chmakova.

The show follows the exploits of junior high students Birch Small, her cousin Liam Coll, Sandra Le Blanc, and Raffi Rodriguez. The show is perhaps best known for how it employs many Japanese Visual Arts Tropes, with the main character Birch being an aspiring manga artist.

The series originally aired on the French version of Teletoon in 2010, and later came to the English version in 2011, which quickly aired the show's single season of 26 episodes over the course of September before taking it off their airwaves that December without further word. It did make a brief return to Teletoon in 2017 for reruns, but it was only aired in an early-morning graveyard slot for a few months before vanishing once more.

The series is currently owned by Classic Media (now DreamWorks Classics), which acquired the show's rights after its previous owners, the European studio TV-Loonland, went bankrupt in 2010. They have made the series available in its entirety for free on the Peacock streaming service, following many years of belief that most of the series' episodes had been lost.

My Life Me provides examples of: