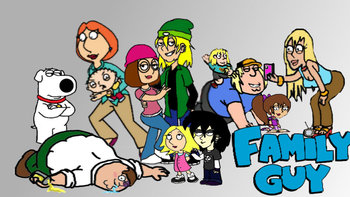 is a story of how Meg meet a boy named Zack after Peter abandoned her at a 7-11. Soon the two of them fall in love, Zack moves in with the Griffins, and later Meg becomes pregnant and gives birth to her daughter, Maddie. While at first it had a continuous plot, after Maddie's birth the story format changed to episodic adventures, though unlike the show, there is a strong continuity. The fic ran for 47 chapters.

The series continued with the sequel, Meg's Family

, which continues in the same episodic format, while introducing new elements, such as Meg befriending a goth girl named Raven, Zack learning about his true origins and the addition of Cody, Zack's son from a previous relationship, to the family. Like its predecessor, it ran for 47 chapters until the author cancelled it due lack of ideas and motivation.

These fics are actually one of the most acclaimed stories in the Family Guy fanfiction community.