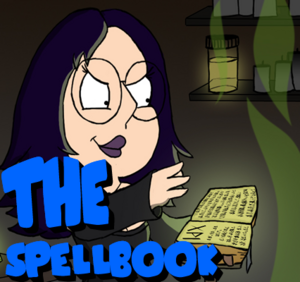 It follows Meg's adventures after Peter bought her a real spellbook for her 18th birthday. Even if Peter thought it was just an old, dusty book, it soon became apparent that the book had real spells. She tries to use her newly acquired magic powers mostly for good, such as helping Brian to win back Jillian, although she also uses it for other less noble uses such pulling pranks on Connie.

Over the course of the story, Meg meets a boy named Matt, they become a couple and get married due to Meg becoming pregnant. Meg would later give birth to a baby girl named Rosie who would be born with magic powers, due to the spellbook's influence. Not much later, Jillian would become pregnant and give births to twin children.

However, Meg also releases the spirit of Miriam, a French witch who was burned by the inquisition, and the original owner of the spellbook, who wants it back for her own evil purposes.

The fic can be read here

It contains examples of the following tropes: