Manga / A Room For Two 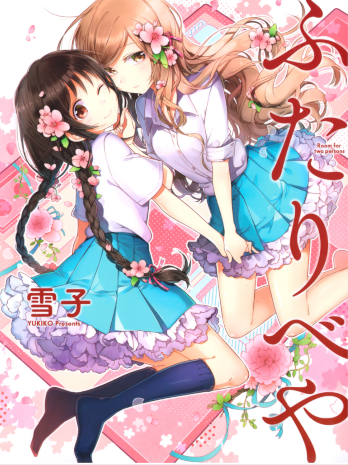 Sakurako Kawawa is a high school first year and has just moved into the boarding house attached to her school. The boarding house pairs students with roommates so its not long after starting to unpack that Sakurako meets her new roommate, the absolutely gorgeous Kasumi Yamabuki. While smitten with the beautiful girl at first sight, Kasumi quickly reveals herself to be something of absent minded layabout who not only didn't pack much belongings, but didn't even bring a bed. Kasumi's personality awakened Sakurako's big sis instincts and it wasn't long before she began caring for Kasumi's every need.

A Room for Two, also known as Futaribeya (ふたりべや) in Japanese, is an ongoing Slice of Life manga by Yukiko. It is set up in the Yonkoma style and began serialization on July 30, 2014 in Comic Birz Magazine. Currently it has 6 volumes published.

Tropes Present in this work are: