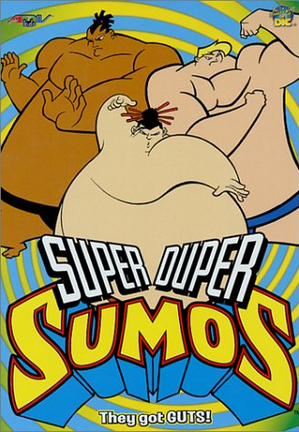 Left to right: Mamoo, Kimo, and Booma.
Super Duper Sumos is a cartoon produced by DIC Entertainment and Ameko Entertainment, and animated by Digital Emation. It stars three sumo wrestler brothers named Mamoo, Kimo, and Booma. Raised by their master Wisdom-san, they now live in Generic City with their cousin, Prima. They fight crime With their buttocks. The Sumos follow the "way of the P.H.A.T.": that is, Peace, Honor, And Truth. The villains of the show are the employees of Bad Inc.: Miss Mister, the CEO of the company; Dr. Stinger, a Mad Scientist who is madly in love with Miss Mister and generally creates the Monster of the Week; Billy "B.S." Swift, the British marketing coordinator; and Ghengis Fangis, a ghost who lives in Miss Mister's necklace and gives unhelpful advice to the corporation.