Something Ricked This Way Comes 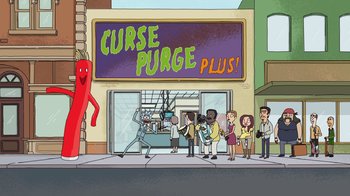 "WUBBA LUBBA DUB DUB!"
Written by: Mike McMahan
Directed by: John Rice
Summer: Grandpa Rick, I like working here.
Rick: You work for the devil!
Summer: So what?
Rick and Mr. Needful: "So what?"
Summer: Yes, so what if he's the devil, Rick? At least the devil has a job. At least he's active in the community. What do you do? You eat our food and make gadgets. Buh-bye.

Summer gets a job at a pawn shop owned by the devil. Jerry helps Morty with his science fair project.