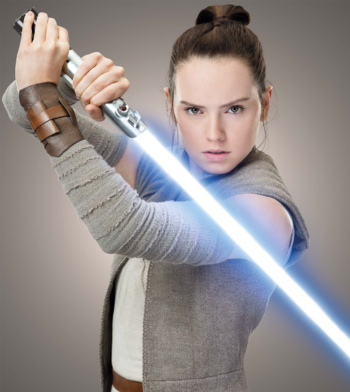 "I think I can handle myself."

A self-sufficient scavenger who spent a large part of her life on Jakku. She was something of a loner that took an interest in the myths and legends of the wars that preceded her birth, and she had no grand aspirations for her life, happy to live alone on Jakku in hopes her parents would one day return... At least until meeting BB-8 and Finn (and later, Han Solo) and being drafted into the conflict with Resistance and the First Order. Her first encounter with Kylo Ren — the fallen Ben Solo — revealed she is Force-Sensitive and a prodigy at that, and she went on to seek the teachings of Luke Skywalker, who she would learn from before receiving further training from his sister, Leia Organa.

Initially appearing to be an unremarkable if hypercompetent individual, Rey eventually learned of her true nature about a year after leaving Jakku behind her — her father was an imperfect clone of Emperor Palpatine, making her the "granddaughter" of Darth Sidious. Finding love with an unnamed woman, the two both escaped from the Sith Eternal and chose to be "no one", raising a child in secrecy before leaving her on Jakku to spare her an even worse fate, at the cost of their own lives. Rey struggled with the Dark Side of the Force on her Jedi path, and this knowledge, alongside the return of Palpatine in a cloned body, nearly broke her — as she realized that the power that she'd been struggling to understand was something that could hurt those she cared about most.

Nonetheless, she was reminded that the Skywalker family — Han Solo, Luke Skywalker, and Leia Organa — took her in as one of her own, as in spite of Leia knowing who she was, she saw her potential to be a better person than her grandfather. Rey rejected her dark heritage and was able to turn Ben back to the light, before the two of them confronted Sidious and successfully ended the resurrection of the Sith for good. While Ben gave his life to restore hers, ending the Skywalker bloodline, Rey vowed to take up his family's name — and their goals and legacy — as her own after giving the family a symbolic burial, placing their lightsabers in the sands of Tatooine near the resting place of Shmi Skywalker.

Advertisement:
open/close all folders
A to D
E to L
M to S
T to Z
"Be with me."