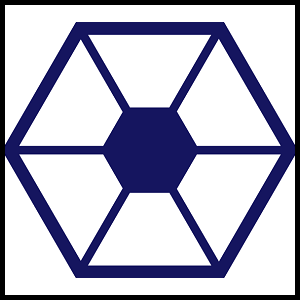 "It is an honor to stand before you, for you represent the freedom and the future of our galaxy. The once-great Republic and Jedi Order have become victims of their own ambitions, and the Supreme Chancellor is no more than a pawn of corporate monopolies. As a people you called out for change, you called out for leadership, and I humbly answered that call. Together we challenged the system. We asked for equality. And how were we met? With war! The Jedi secret army of clones was revealed, and their treachery was far greater than we could have imagined! Countless living beings—these clones the Jedi created—have been sent to their deaths, while we sacrifice mainly droids. Our soldiers of flesh and blood are willing participants! They are your fathers and sons, mothers and daughters, who fight not because they were grown and designed to do so, but because they know in their hearts that they are fighting for a just and noble cause!"
— Count Dooku

The Confederacy of Independent Systems, also known as the Separatist Alliance, was an organization of solar systems that declared their departure from the Galactic Republic. Led by Count Dooku and backed by corporate titans that offered their unlimited droid armies to the cause, the Separatists waged war with the Republic during a legendary conflict known as the Clone Wars. Unbeknownst to most members of the Separatists, they were actually pawns in Darth Sidious' plan to transform the Republic into the Empire and destroy the Jedi Order. 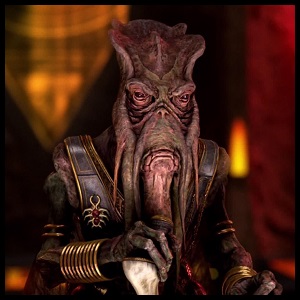 Voiced by: Marton Csokas (films), Matthew Wood (The Clone Wars)
Appearances: Attack of the Clones | The Clone Wars | Catalyst | Revenge of the Sith
Padmé Amidala: You're committing an act of war, Archduke. I hope you're prepared for the consequences.
Poggle: We build weapons, Senator! That is our business. Of course we're prepared!

Archduke Poggle the Lesser was the leader of the Geonosians and a founding member of the Separatist Alliance. His factories provided the Separatists with many of their Battle Droids. 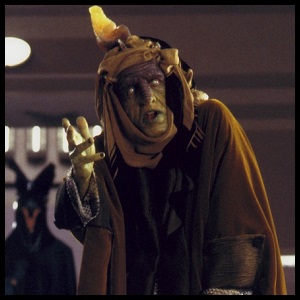 Passel Argente was the Magistrate of the Corporate Alliance. He was a Republic senator for his homeworld of Kooriva before joining the Separatist Alliance. 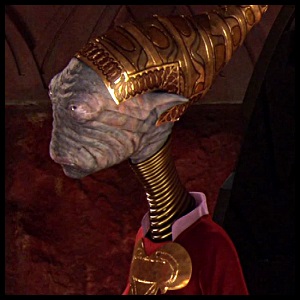 Shu Mai was the Presidente of the Commerce Guild and one of the leaders of the Separatist Alliance. 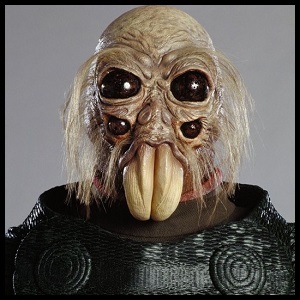 Portrayed by: Paul James Nicholson
Appearances: The Phantom Menace | Attack of the Clones | Revenge of the Sith

Po Nudo was the junior senator representing Ando. When the defected to the Separatists, he brought the Hyper-Communications Cartel with him, alongside half the Lambda Sector. 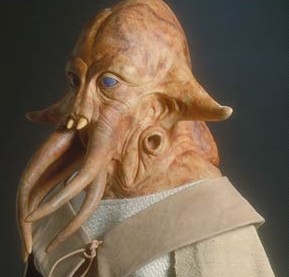 Portrayed by: ??
Appearances: The Phantom Menace | Attack of the Clones | The Clone Warsnote What Could Have Been appearance in arc that has already been scripted. | Revenge of the Sith

Tikkes was a Quarren senator representing Mon Cala who went over to the Separatists. 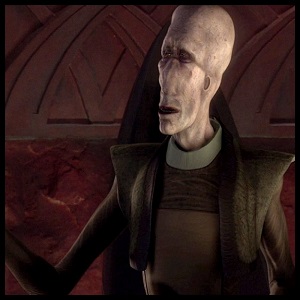 Voiced by: Chris Truswell
Appearances: Attack of the Clones | Revenge of the Sith
"The Banking Clan will sign your treaty."

San Hill was the Chairman of the InterGalactic Banking Clan. He helped lead the Separatists as part of the council of corporate interests who started the war. 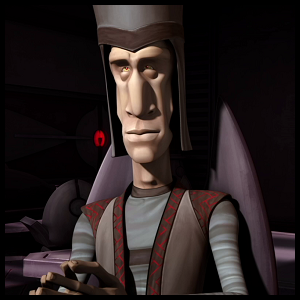 Nix Card was a senator who served as a representative of the InterGalactic Banking Clan in the Galactic Republic Senate during the Clone Wars. 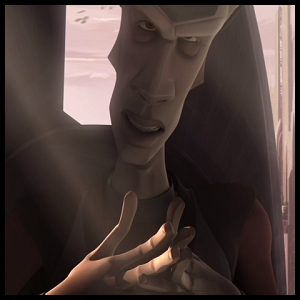 Voiced by: Stephen Stanton
Appearances: The Clone Wars
"We have no stake in this war, Senator. You know that. War is... distasteful to all of us."

Mak Plain was an official of the InterGalactic Banking Clan on Coruscant. 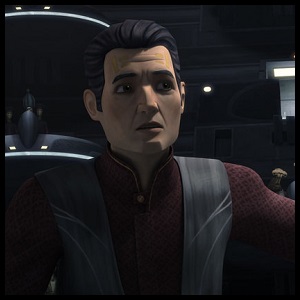 Voiced by: Robin Atkin Downes
Appearances: Queen's Shadow | The Clone Wars
"You know, I spent so much of my life misunderstood. What will they say about me now? What will I have left behind?"

Rush Clovis was the Senator of Scipio and eventually Chairman of the Banking Clan during the Clone Wars. He was also an old flame of Padmé Amidala's. 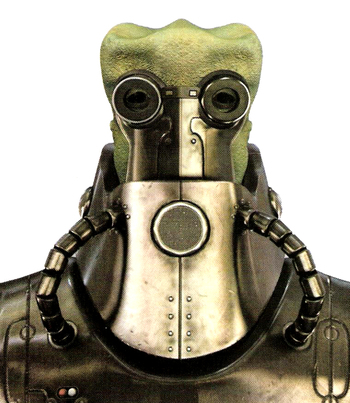 Voiced by: Chris Truswell (films), Matthew Wood (The Clone Wars)
Appearances: Attack of the Clones | The Clone Wars | Revenge of the Sith
"With these new battle droids we've built for you, you'll have the finest army in the galaxy." 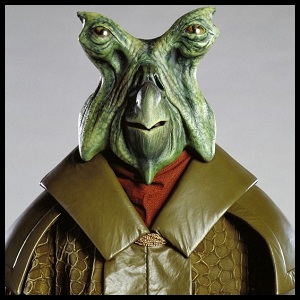 Portrayed by: ??
Voiced by: Phil LaMarr
Appearances: Attack of the Clones | The Clone Wars | Revenge of the Sith

Gume Saam was a corrupt senator of the Techno Union who was secretly aiding the Separatists in order to profit from the Clone Wars. 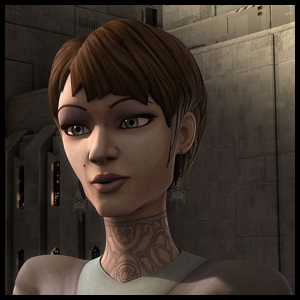 An idealistic politician from Onderon, Mina Bonteri used to be Padmé Amidala's mentor in the Senate. While Mina believed in the Separatist cause and openly admired Count Dooku, she also sought to stop the spreading violence of the Clone Wars. On Padmé's urging, she proposed to open peace-talks with the Republic, which the Separatist Parliament agreed upon. However with this, she became a threat to the Sith Lords’ plans and was murdered by Dooku's thugs. She was also the mother of Lux Bonteri. 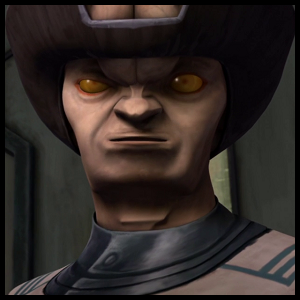 Voiced by: Corey Burton
Appearances: The Clone Wars
"We can't do this, Dooku. The Separatist Senate will never approve."

Bec Lawise was the leading senator of the Separatist Senate. 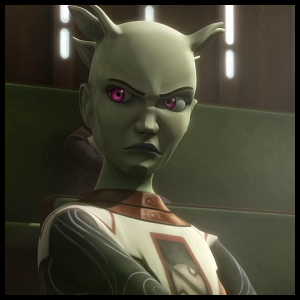 Voiced by: Catherine Taber
Appearances: The Clone Wars
"Say it aloud before this gathering: as representative for Chancellor Palpatine that you declare, without reservation, the Separatist state legitimate."

Voe Atell was a Separatist Senator who was connected to the Corporate Alliance. She was a leader of the War Faction, an aggressive political party that advocated continuing and expanding the war against the Republic. 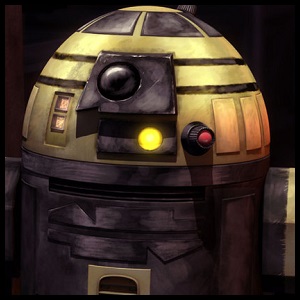 R3-S6 was an astromech droid sent by the Separatists to spy on Anakin Skywalker by serving as a replacement astromech after R2-D2 goes missing during the Battle of Bothawui. 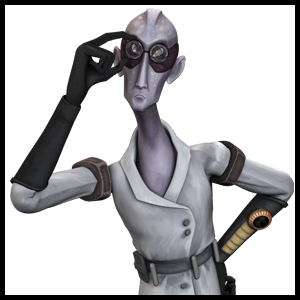 Voiced by: Michael York
Appearances: The Clone Wars
"I suppose one can never have too many lab rats."

Nuvo Vindi was an insane yet brilliant Faust scientist in the employ of the Separatists who resurrected the Blue Shadow Virus. 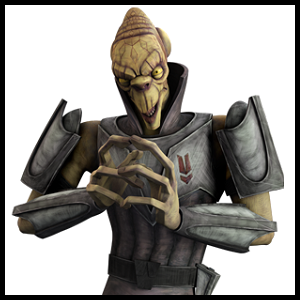 Osi Sobeck was the warden of the Citadel, an infamous prison captured by the Separatists which was designed to hold rogue Jedi.