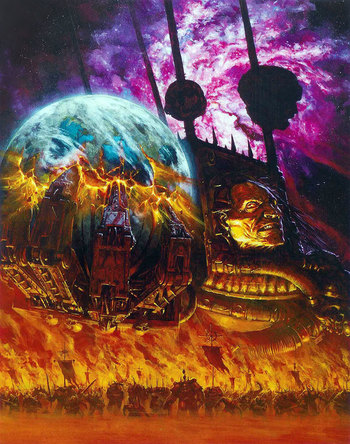 "I am the Arch-fiend, the Despoiler of Worlds, and by my hands shall the false Emperor fall."
"Drachenfels. The Great Enchanter. A devil in human form, who cheated Death for centuries unknown; a man with appetites so base they lay beyond satiation; a necromancer, torturer of the dead, dismemberer of spirits; a vileness made flesh; a wizard, a scholar, a monster. Untold are the reaches of his barbarities, uncounted the number of his treacheries, beyond belief the depravities of his practices. Was ever such a vileness born of mortal flesh?"
—Lives of the Depraved, by Konrad Steinhoff, Warhammer Fantasy RPG 1st ED—Castle Drachenfels
Advertisement:

Warhammer, both the original and in space, takes place in a brutal setting. Some characters still manage to go above and beyond in terms of villainy.

Main setting (may include characters from the Expanded Universe)
Examples