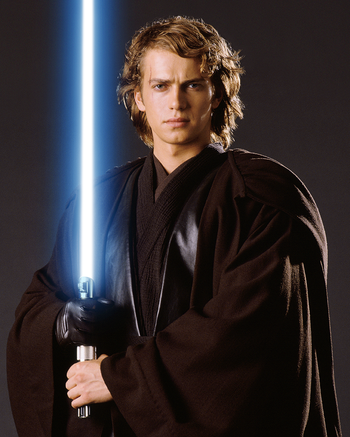 "I will be the most powerful Jedi ever."
Click here 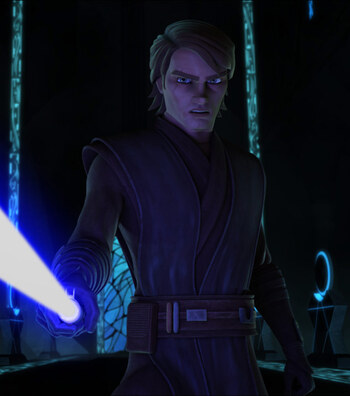 to see his The Clone Wars appearance 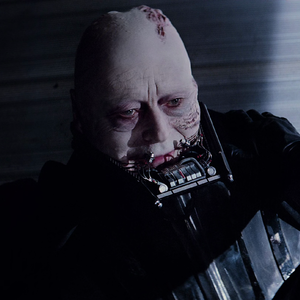 Anakin Skywalker was a Force-sensitive Jedi Knight during the final years of the Galactic Republic in addition to being the former Padawan learner of Obi-Wan Kenobi, the husband of Padmé Amidala, the master of Ahsoka Tano, the father of Luke Skywalker and Leia Organa, and the grandfather of Ben Solo (who later became known as Kylo Ren).

Anakin was strongly believed to be the Chosen One of the Force by the Jedi Order and developed from a lowly slave on Tatooine to the Jedi apprentice of Obi-Wan Kenobi and a hero of the Clone Wars. His promising career was tragically cut short when his personal demons lured him into turning to the Dark Side and becoming known as Darth Vader — the Dark Lord of the Sith and apprentice to Emperor Palpatine/Darth Sidious. Following a disastrous duel with Obi-Wan which left him horrifically scarred, was transformed into a cyborg bound to a suit of armor.

Vader would devote much of the rest of his life to hunting down the remaining Jedi alongside the Inquisitorius and stamping out rebellions to the Empire. Vader eventually learned of that his son, who he once believed died with his wife, was still alive. While Vader sought to recruit Luke to the Empire — first in a bid to overthrow the Emperor, and later to serve as allies to both — his son's continued faith in his ability to do good was proven when he willingly sacrificed his life to kill the Emperor.

Anakin died seeing his son one last time, but his sacrifice was deemed redemptive in the eyes of the Force, allowing him to live on as a Force Spirit to watch over a generation who would not have to suffer under the reign of the Empire. Later, he would be among the many Jedi advising Rey during her final trial — a duel against a resurrected Darth Sidious.

For information about Darth Vader, see his personal page.

Example of:
Pay Evil unto Evil