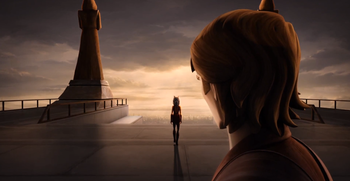 Never give up hope, no matter how dark things seem.
Advertisement:

After Ahsoka has been captured by Republic forces, she is tried for crimes she did not commit. While Ahsoka is facing penalty of death on the Military Court, Anakin searches for evidence of her innocence.

"I understand. More than you realize, I 'understand' wanting to walk away from the Order."
"I know."