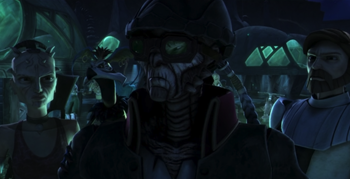 This is the recap page of an episode of Star Wars: The Clone Wars. You might be looking for the Bounty Hunter trope.

After the Republic loses contact with a medical station above Felucia, Anakin, Obi-Wan, and Ahsoka are sent to investigate. Soon they discover that the station was destroyed by the Separatists, falling under attack from Vulture droids left behind as patrol units. The Jedi's ship is shot down and they're forced to crash-land on Felucia. Stranded, they ask for help from villagers, who have their own problems: Hondo Ohnaka's pirate gang is extorting them for the valuable medical herbs they're harvesting.