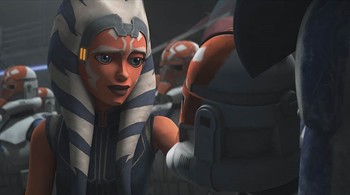 "Glad to have you back, Commander."
"Hello, Master. It's been a while."
— Ahsoka Tano
Advertisement:

Anakin and Obi-Wan are leading Republic forces on Yerbana when Yularen requests them to head to the ship for a transmission call. The people on the other end turn out to be Ahsoka and Bo-Katan, who inform the two that they've located Maul on Mandalore after he escaped imprisonment by the Sith.

Meeting in person later, Bo-Katan asks if the Republic can lend their forces to help them retake Mandalore and capture Maul, but Anakin and Obi-Wan are reluctant on providing help. Things get more complicated when news breaks of General Grievous invading Coruscant.

"I was hoping for Kenobi. Why are you here?"