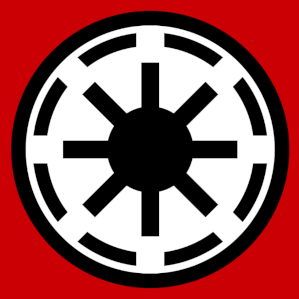 The Galactic Republic was a democratic union of sovereign star systems that governed the galaxy for over a thousand years. The Republic was governed by the Galactic Senate, consisting of elected officials from each system and led by a Supreme Chancellor, while the knights of the Jedi Order served as peacekeepers, diplomats, and advisors to the Senate.

However, even the noblest of governments can fall to corruption and stagnation, and the Republic was no exception. By the time of the Prequel Trilogy, megacorporations and banking conglomerates wielded a great deal of influence in the Senate, leading to extensive unrest and, eventually, an outright rebellion by the secessionist Confederacy of Independent Systems.

The resulting "Clone Wars" - named for the Republic's use of cloned soldiers to quickly reinforce their unprepared military - devastated the galaxy and brought the Republic to the brink of collapse, allowing the corrupt Supreme Chancellor Palpatine, who had secretly orchestrated the entire war for this purpose, to reorganize the failing government into the tyrannical Galactic Empire.

Grand Army of the Republic 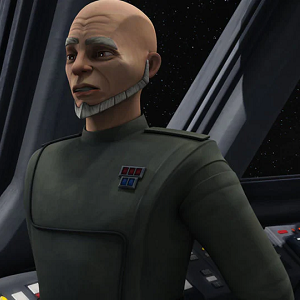 Shoan Kilian was a human male officer who held the rank of Admiral in the Galactic Republic Navy during the Clone Wars against the Separatist Alliance. He served under Mace Windu as an admiral of the Republic cruiser Endurance. 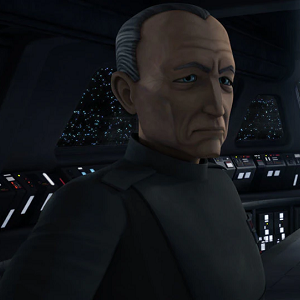 Barton Coburn was a human male officer who held the rank of admiral in the Navy of the Galactic Republic. During the Clone Wars, he served under the command of Jedi General Plo Koon. 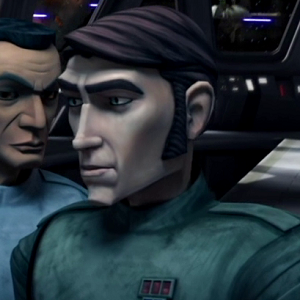 Voiced by: James Arnold Taylor
Appearances: The Clone Wars
"If help does not arrive soon, the entire Outer Rim garrison will be wiped out."

The commander of a fleet defending Ryloth in conjunction with Jedi Master Ima-Gun Di. Dao and his fleet were wiped out by an invading Separatist fleet. 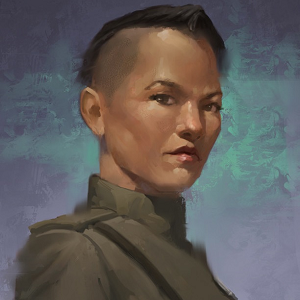 Appearances: All There in the Manual (On the Front Lines)

Honor Salima was the commander of the Coruscant Home Defense Fleet a decade prior to and during the Clone Wars. Notably, she served during the Battle of Coruscant, defending against a surprise attack from the Separatists.

See his entry on the Galactic Empire page.
Davits Draven

See his entry on the Rebel Cells page. 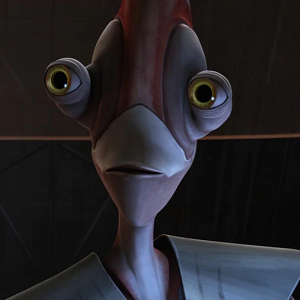 Voiced by: Cara Pifko
Appearances: The Clone Wars
"Chancellor, I must protest. Besides being the last of its kind, this creature may be intelligent."

Sionver Boll was a female Bivall scientist who served the Galactic Republic during the Clone Wars. Upon the discovery of the Zillo Beast on Malastare, the Republic expressed interest in possible reproduction of the creature's indestructible scales as armor, calling upon Dr. Boll to lead the project. 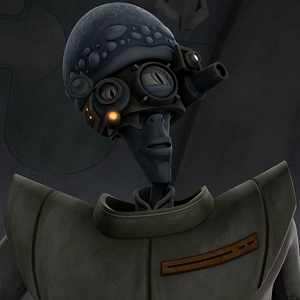 Gubacher was a male Parwan doctor who served the Galactic Republic during the Clone Wars. He specialized in artificial intelligence and worked alongside the Jedi in designing spy droids such as the D-Squad, operating a research and development lab in their temple on Coruscant. He worked with other members of the cell in Project Celestial Power, otherwise known as the development of the Death Star.

D-Squad was a military squad that served the Galactic Republic during the Clone Wars. The squad consisted of four astromech droids and one DUM-series pit droid and was placed under the command of Colonel Meebur Gascon. They were tasked to retrieve an encryption model from a Separatist dreadnought. They succeeded, but subsequently ended up crashing on Abafar and then accidentally boarding a Separatist-hijacked Republic Star Destroyer filled with explosive rhydonium in an attempt to assassinate Republic officials at a conference at Valor station. Fortunately, thanks to the combined efforts of D-Squad and the surviving droid crew aboard the hijacked ship as well as R2-D2's near-sacrifice, this was prevented. 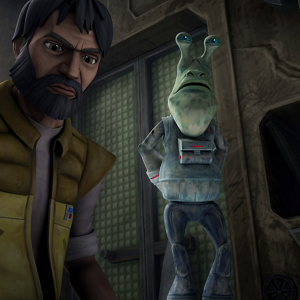 Voiced by: Stephen Stanton
Appearances: The Clone Wars
"I am an accomplished battlefield strategist. I analyze the enemy terrain and plot a course to victory."

Meebur Gascon was a male Zilkin who served as a colonel in the Grand Army of the Republic during the Clone Wars. He dreamt of being promoted to the rank of Brigadier General. He was considered a military strategist and served with Republic command since the Battle of Geonosis. When he finally received the opportunity for in-field experience, his self-esteem issues began to surface. 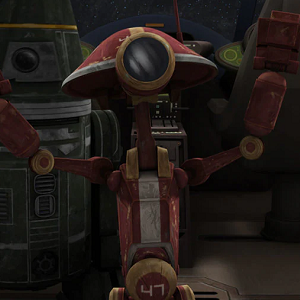 WAC-47 was a masculine-programmed DUM-series pit droid who served the Galactic Republic during the Clone Wars. He was a part of D-Squad along with several other droids on an important mission, serving under Colonel Meebur Gascon and piloting his ship.

See his entry on the Rebel Heroes page.
M5-BZ

See his entry on the Jedi Order page.
U9-C4

See his entry on the Jedi Order page.
QT-KT

See her entry on the Jedi Order page. 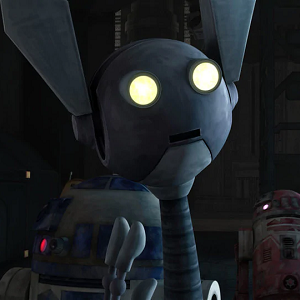 BNI-393 was a LEP servant droid with feminine programming. She was aboard a Republic Star Destroyer when it was hijacked by Separatist droids, who filled the ship with rhydonium in a plan to use the ship to assassinate Republic officials attending a conference at Valor Station. Bunny and other droids aboard the ship went into hiding during the takeover until the arrival of D-Squad and helped the squad retake the ship.

See his entry on the Clone Troopers page. 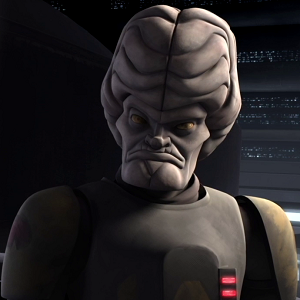 Bric was a Siniteen Bounty Hunter hired as a drill sergeant for clone cadets in training on Kamino. Unlike his co-worker El-Les, he saw it only as a job. 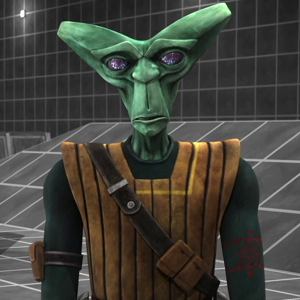 El-Les was an Arcona bounty hunter who was contracted to work as a drill instructor for clone cadets in training on Kamino alongside Bric. 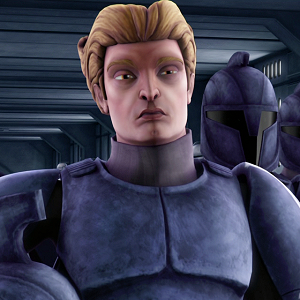 Voiced by: James Marsters
Appearances: The Clone Wars
"Count Dooku has paid me a fortune to deliver your slimy carcass, so please try to stay alive."

Faro Argyus was a captain in the Senate Commandos who betrayed the Galactic Republic and freed Nute Gunray from captivity with the help of Asajj Ventress during the Clone Wars. 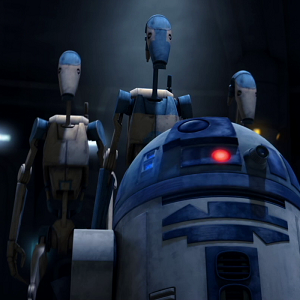 They were a squadron of battle droids that were captured by the Republic and reprogrammed to serve it during the Clone Wars. They participated in a mission to free Jedi Master Even Piell from the Separatist prison known as the Citadel. 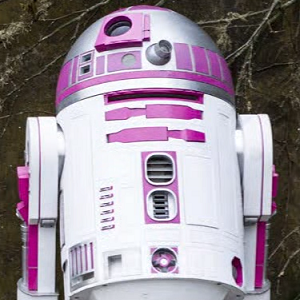 R2-KT was a compassionate, pink-plated R2 series astromech droid with feminine programming who witnessed the rise and fall of numerous galactic powers. Serving in the Galactic Republic through the Clone Wars, R2-KT eventually came into the service of Leia Organa's Resistance fifty years later during their war against the First Order. 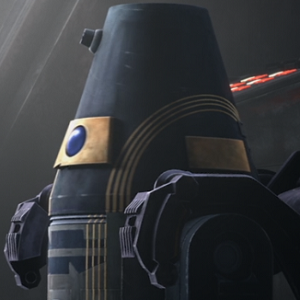 RG-G1 was a R4-class astromech stored aboard the Tribunal. Upon the activation of Order 66, he, along with R7-A7 and CH-33P, were recruited to aid the former Jedi in her attempts to survive the chaos that followed. He was killed aiding Ahsoka and Rex's escape. 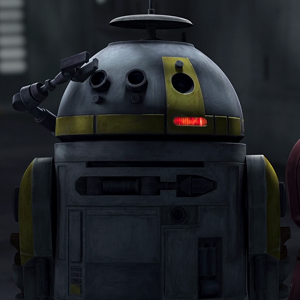 CH-33P was C1-series astromech droid serving aboard the Tribunal. When Order 66 was activated, Ahsoka came looking for allies in the droid storage bay of the ship. He aided her and Commander Rex in their escape from the Tribunal, giving his life to ensure they escaped.