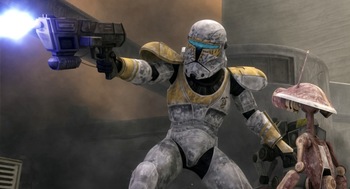 A soldier's most powerful weapon is courage.
Advertisement:

After having made it across the void, R2-D2, Colonel Gascon and D-Squad enter the town of Pons Ora in search of food, power and a way off of Abafar. Gascon and WAC-47 enter the Power Sliders diner, but are chased out by the proprietor, Mr. Borkus, after Gascon loudly announces himself. WAC suggests that Gascon try dumpster-diving for food, and while attempting to do this around back, they run into Gregor, an employee at the diner. Gascon and WAC immediately recognize Gregor as a clone... but he doesn't even remember the word "clone", or the Grand Army of the Republic, at all. It seems that Borkus had reasons beyond Fantastic Racism for chasing Gascon and WAC out of his business.

On top of this, R2 and the other astromechs have discovered battle droids, loading a shuttle with Abafar's volatile rhydonium fuel to blow up a Jedi Cruiser hovering above...