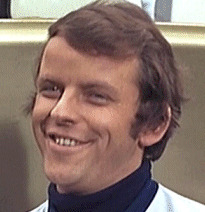 Julian Holloway, (24 June 1944), is an English actor and voice actor best known for his roles in the Carry On... Series.

He is one of five children of veteran actor Stanley Holloway.

Holloway's first major acting role was when he appeared as Quentin in four episodes of Our Man Higgins. He later became a regular face in the Carry On films, first appearing in Follow That Camel in 1967 and would continue to pop up in small or medium sized roles until he made his final appearance in 1971's Carry On at Your Convenience (not counting a one-off return to the series in 1976's Carry On England when he needed extra money during a theatre tour).

Since The '90s, he has frequently worked as a voice actor in America.