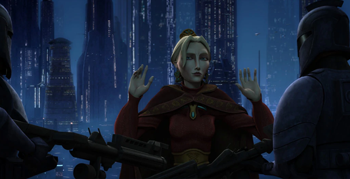 In war, truth is the first casualty.

Duchess Satine has come to Coruscant to persuade the Republic that their intervention is not necessary in order to deal with the terrorist group Death Watch. But the rogue Mandalorian warriors, in league with the Separatists, are plotting against her as a Republic occupation will assist their plans. And when Satine is forced to go on the run after being framed for murder, it's up to her allies among the Jedi and the Senate to unmask the conspiracies swirling around her and prove she's innocent and the Republic does not need to occupy Mandalore.