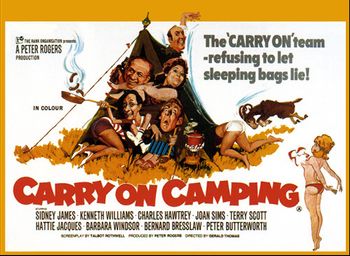 "Well, if this is paradise, give me 'ell".
— Sid Boggle after spending the night in a rainy tent.
Advertisement:

Carry On Camping is the seventeenth film from the Carry On series, that is arguably the best film of the entire franchise, and was the highest-grossing film at the box office in 1969. It stars series regulars Sid James, Charles Hawtrey, Joan Sims, Kenneth Williams, Terry Scott, Barbara Windsor, Hattie Jacques, Bernard Bresslaw, Julian Holloway, Dilys Laye, Peter Butterworth, and Betty Marsden.

The movie hops between a Road Trip Plot and a Camping Episode depending on which set of characters are being focused on, as a group of people decide to spend their holidays at Paradise Camp Site, owned by Josh Fiddler (Butterworth), a greedy farmer who charges customers ludicrously.

Keen campers that arrive are Sid Boggle (James) and Bernie Lugg (Bresslaw), who are inspired to go camping after watching a movie at the cinema about a nudist campsite. They hope to liberate their prudish girlfriends, Joan Fussey (Sims) and Anthea Meeks (Laye), and hopefully have a chance to finally make love with them. The former goal doesn't go well, and the latter goal balances on a very thin line.

Another set of campers are married couple Peter and Harriet Potter (Scott and Marsden), who were completely divided over the idea of going camping. Harriet is keen to go on a camping trip and is so wrapped up in her own little world that she doesn't listen to her camping-hating husband, who tries to convince her to go on holiday overseas, and fails miserably.

Then there's the happy-go-lucky Charlie Muggins (Hawtrey) whose tent is blown away and is allowed to stay with the Potter couple, much to Peter's disgust, and manages to unintentionally cause him loads of grief.

Finally, there are Babs (Windsor) and the other schoolgirls from the posh Chayste Place boarding school, who hope to get lucky with boys whilst on holiday, but are watched like hawks under the beady eyes of their head teacher Dr. Soaper (Williams), the school Matron, Miss Haggard (Jacques) and coach driver Jim Tanner (Holloway) who are secretly dealing with their own problems, such as Miss Haggard fawning over Dr. Soaper and hoping to go all the way with him.

For other Carry On films about vacations, also see Carry On Cruising, Carry On Abroad and Carry On Behind.