Series / Top of the Pops 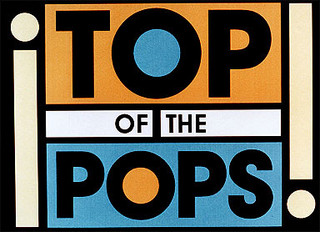 A long-running music programme from The BBC that ran from New Year's Day 1964 to July 2006; it still turns up on special occasions, such as every Christmas Day and several Comic Relief nights.

It was presented by disc jockeys from BBC Radio 1 for many years (including legendary indie rock DJ John Peel) but most viewers associate the show with Jimmy Savile, who presented the first episode, co-hosted the last, and appeared regularly as a host for 20 years.

For a large part of its history, the artists performing on the show were required to lip synch their performance. Some (like Jethro Tull, Belle and Sebastian, Blur, Oasis, The Cure, Nirvana and Marillion) had fun with this, intentionally miming their vocals and instruments poorly. The Smiths, in fact, gained their first major breakthrough with their anarchic miming of their first UK Top 40 single "This Charming Man" on the show. Before the "lip sync-only" rule was removed, there were a handful of performers (namely New Order, David Bowie, John Lennon and Billy Bragg) who performed one of their songs ("Blue Monday", "Starman", "Instant Karma" and "Between the Wars", respectively) live on the program. These performances were always a made into a big deal. Suzi Quatro's band really went to town on this: during a performance of "Devilgate Drive", the keyboards player left the piano and got up and danced, whilst the piano appeared to play itself. The drummer soon joined in, whilst the thunderous drum-playing continued with no obvious musician at the drum kit to provide this. Suzi herself took both hands away from her bass guitar to emphasise the point she was miming. Meanwhile three hundred clearly bored and embarrassed kids just sat there, listlessly clapping out the beat and still getting it wrong.

Not to mention various adaptations in other countries around the world (although an American adaptation flopped, perhaps because trying to sell this to the home of American Bandstand and MTV was the televisual equivalent of trying to sell snow to Eskimos or coal to Newcastle).

Sadly, the entire original show is now trapped in the shadow of the discovery that Savile abused his position at the BBC and with various charities to become the British Isles' most prolific sex offender (although according to Operation Yewtree, the investigation into celebrity sex offences, he probably wasn't the only ToTP presenter to abuse his position this way; colleague Dave Lee Travis was tried on similar allegations, and was convicted on an indecent assault charge, although it was not directly connected to ToTP). The stories of his assaults only broke to the public after his 2011 death, so he was never brought to judgment for his crimes. Not surprisingly, his episodes are no longer seen in reruns, and any footage used for news/archival purposes is heavily blurred to edit out audience members out of fears that anyone in the audience was a potential victim.