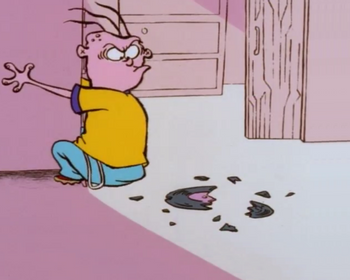 Some records were not made to be broken.
Vinyl LP records in media break easily if thrown or manhandled. When they do break, they tend to shatter into small pieces just like breaking glass. They even sound like glass when they break.
Advertisement:

This is The Coconut Effect for most of its run. Vinyl records don't break that easily, they generally don't shatter, and they definitely don't sound like glass when they break. This is a carryover from when those big round discs were shellac 78s, which do shatter dramatically (though they still don't quite sound like glass). Shellac records and vinyl LPs look almost alike, and they coexisted for a few years; by the time most of the big round discs were vinyl, people (or maybe just execs) kept expecting them to act like shellac in films and TV, at least as far as durability went.

If a work was written or produced before about 1948, a large-diameter record-shattering is almost certainly not an example of this trope, as it would be shellac, not vinyl. By 1952, vinyl records were roughly even with shellac in the percentage of records sold; by 1958, new 12-inch diameter discs were virtually always vinyl. The smaller, 7-inch diameter records were never shellac, and therefore one shattering is always an example of this trope.