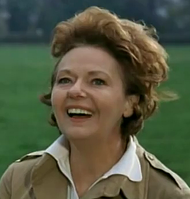 For 10 years, she was a member of the cast on Beyond Our Ken and Round the Horne, playing most of the female characters, such as Bea Clissold, Buttercup Gruntfuttock, Daphne Whitethigh, Judy Coolibar and Dame Celia Molestrangler.

Alongside her work on radio, she appeared in many films such as two Carry On films, The Wild Affair, The Dresser and Little Dorrit, while in The '90s she made more appearances on TV.

She died at the age of 79 the way she always claimed she wanted to go - with a glass of gin in her hand.