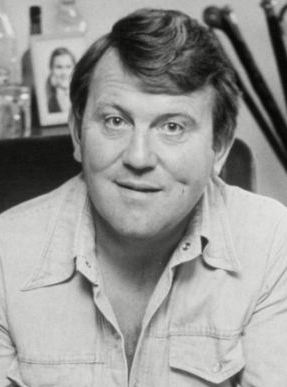 Terry Scott (born as Owen John Scott, 4 May 1927 — 26 July 1994) was an English actor and comedian, known for his memorable appearances in the Carry On film series, the BBC TV show Terry and June, and voicing Penfold on Danger Mouse. When World War II finished, he left the navy and began appearing in Butlins' seaside comedy acts with other comedians, before he was approached by the BBC, and appeared as bit characters on their comedy shows and radio plays.
Advertisement:

One of his first films was on one of the St. Trinian's movies in 1957, and later made a cameo in Carry On Sergeant, followed by seven other films in the Carry On series throughout the late 1960s and '70s. In between films, he continued to appear on TV, particularly alongside Carry On regular June Whitfield in Happy Ever After and popular series Terry & June, as well providing the voice for Penfold in Danger Mouse.

Terry married twice, firstly to a dancer in 1949, and then another woman in the 1957, having 5 children within the two marriages. His life spiralled out of control when his health began to decline in the 1980s, and Terry & June was cancelled. This led to a breakdown, in which he admitted having affairs behind his second wife's back, who filed for divorce just when he discovered that he was dying from cancer, eventually dying in misery in 1994.