Film / Carry On at Your Convenience 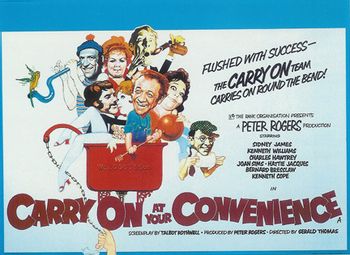 "The biggest basinful of fun since the invention of water-loo!" boasts the trailer. The box office begs to differ.
"That's all I need: A face full of soggy knickers!"
— Sid Plummer, after walking into his wife's hung laundry
Advertisement:

Carry On at Your Convenience was the fourth Carry On film of the 1970's, and the 22nd of the franchise, starring Sid James, Kenneth Williams, Charles Hawtrey, Joan Sims, Hattie Jacques, Bernard Bresslaw, Kenneth Cope, Patsy Rowlands, Jacki Piper, and Richard O'Callaghan.

It is noted for being the first box office flop in the Carry On series; with few exceptions, most of the films that followed it were flops as well. This was mostly due to the portrayal of the working class as stupid and lazy, and the middle class as superior and clever; most of the audience of the Carry On films were the "stupid and lazy" working class, so they reacted rather negatively - some even boycotting the movie when it was first released.

At Your Convenience starred Cope as lazy union representative Vic Spanner, who works in the Wm.C. Boggs & Son toilet factory, run by its traditionalist owner W.C. Boggs (Williams) and foreman Sid Plummer (James). He organizes strikes over the most minor of inconveniences (or when he wants to watch a football match), much to the disgust of the workers - except for Bernie Hulke (Bresslaw), his Dumb Muscle - the company they work under, and his mother, Agatha (Renée Houston). The firm cannot afford the constant strikes because they are losing loads of money, yet Vic holds yet another strike over the banning of tea servings on the factory floor.

Alongside this fiasco, there are other problems around. Sid is divided over caring about the situation because he is attracted to factory worker Chloe Moore (Sims) who is unsatisfied with her travelling salesman husband Fred (Bill Maynard), and also because he is earning lots of gambling money from his wife Beattie's (Jacques) budgie, Joey, who makes correct predictions over the horse races; Mr. Boggs' son Lewis (O'Callaghan) is competing with Vic over the affections of Sid's daughter Myrtle (Piper), who doesn't seem to be able to make up her mind; product designer Charles Coote (Hawtrey) is considering manufacturing 1,000 bidets for the wealthy King Frauzi of Aslam, even though Mr. Boggs is unimpressed with the idea; and Mr. Boggs' secretary Hortense Withering (Rowlands) is madly in love with him, much to his displeasure.

It seems the works outing to Brighton may hold the solutions to many of the firm's issues however, as Hilarity Ensues.

Alternative Title(s): Carry On Round The Bend