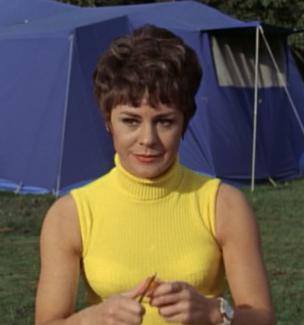 "Theatre companies are like families and these days of course, I'm the mother, dispensing tea and sympathy to anyone who needs it."
Advertisement:

Her first appearance on stage was as a boy in The Burning Bush at the age of 14 and a year later she made her first film appearance in Trottie True.

Throughout The '50s, she appeared in many West End revues and was the first Dulcie in The Boy Friend. By the end of the decade, she began appearing in more films. Four days before filming was due to start on Carry On Cruising, Joan Sims fell ill and Laye was cast at short notice to fill the role of Flo Castle, and would return to the Carry On... Series a further three times.

In 2006 she was diagnosed with cancer, but continued to make appearances on stage and TV.

She died from lung cancer at the age of 74, living six months longer than she was predicted to.