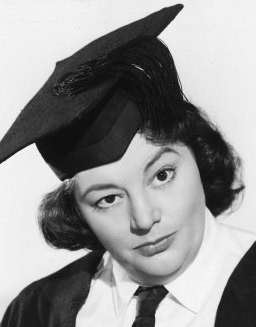 Hattie Jacques, born as Jacqueline Edwina Jaques (7th February 1922 — 6th October 1980) was a comic British actress, known for her appearances in the Carry On franchise and her vast career as a radio star.

Jacques didn't begin her acting career until the late 1940s. She trained as a nurse and became a matron to war hospitals during the Second World War, but later she tried out for theatre and appeared in pantomimes and other stage productions. At this point, she gained the nickname "Hattie", because some actors called her a Caucasian Hattie McDaniel (who was Mammy in Gone with the Wind), and she used if for the rest of her career.

She made her first film appearance in 1946 in an uncredited role and appeared the 1948 adaptation of Oliver Twist. She also joined the Vic Theatre Company and appeared on radio in bit roles. Becoming a well-known voice in the 1950s led to her appearing in the weekly radio series Educating Archie alongside future collaborators Tony Hancock and Eric Sykes, later appearing in Hancock's Half Hour with Sid James and Kenneth Williams, and The Goon Show, whilst appearing on stage in many productions with Terry-Thomas.

In 1958, Jacques made a cameo in Carry On, Sergeant, which led to her appearing in the Carry On film series 14 times in total. She mostly portrayed matron characters, which led to her being the Ur-Example of Battleaxe Nurse in British media, but she also had caring roles as well, and made frequent appearances in the TV specials. On television, she featured in many episodes of Eric Sykes' show Sykes and a... and Sykes, and several other comedy shows and films.

Outside of the show business world, Jacques suffered from health problems. She struggled to lose weight and would often diet, achieving brief success before ballooning back even worse. She later suffered from arthritis and had tension with Sykes, who would often get frustrated at her performances and lack of awareness during filming. Jacques struggled to walk without pain in her legs from ulcers and was advised in the late 1970s not to travel far from her home. She died from a heart attack in 1980 after breathing problems and a deteriorating kidney.