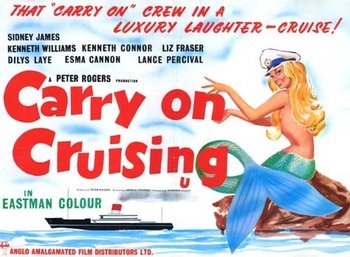 Don't be fooled. There are no mermaids in the film.
"So, what else can I do but... carry on cruising?"
Wellington Crowther
Advertisement:

Carry On Cruising is a 1962 film and the sixth Carry On film in the British film series, which created a milestone for being the first to be filmed in color. It starred Sid James, Kenneth Williams, Kenneth Connor, Liz Fraser, Dilys Laye, Esma Cannon, and Lance Percival.

This was the first Carry On to be based on holidays, inspired by the popularity of cruise holidays with the public in the early 1960's; there is an appearance of a P&O Cruise Ship, whose company was thanked in the opening credits, which is where the movie takes place. Like many Carry On movies to come, Cruising tells several subplots of many different people as they stay together in a packed space. In this case, on a cruise ship - based on some of the passengers and the cruise staff.

Captain Wellington Crowther (James) is in charge of the SS Happy Wanderer and is preparing to travel through the southern continents, but is angered to find out that most of his trusted ship staff are absent and have been replaced at the last minute with first-timers: most importantly, the slightly-snobby First Officer Leonard Majoribanks (Williams), the timid Dr. Arthur Binn (Connor) and the seasick chef Wilfred Haines (Percival), as well as a new bartender Sam Turner (Jimmy Thompson), and steward Tom Tree (Cyril Chamberlain). This creates tension between Captain Crowther and the newbies and he states that they have to show him that they'll be able to handle the jobs and not purposely sabotage.

Unfortunately, this might not be possible. The men'll have to deal with the likes of the flirtatious Glad Trimble and Flo Castle (Fraser and Laye), not to mention the hyperactive old lady Bridget Madderley (Cannon), but even when they're in check, other things continue to go wrong as Crowther constantly becomes the victim of the group's shenanigans.

For other Carry On films about vacations, see Carry On Camping, Carry On Abroad and Carry On Behind.