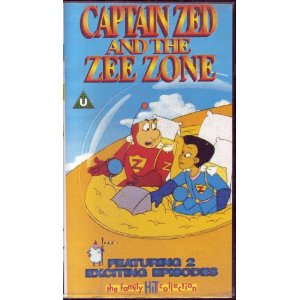 Captain Zed and the Zee Zone (1991) is a British Series that is Western Animation. A co-production between DIC Entertainment (they just animated the show), Collingwood O'Hare Productions (at the time the company was named "Tony Collingwood Productions") and HIT Entertainment (Back in time, when they distributed and produced not only kids programming, but also even distributed programs from TVNZ outside of New Zealand). It mainly delivers An Aesop to its audience but is known for using Nightmare Fuel to get the point across sometimes.

The premise of the series is that the dreams of children are vulnerable to nightmares. Snort and Mutter, respectively the main villain and his henchman, shape-shift and enter these dreams, using the scary scenarios to take over the dreams. The dreaming children are defended by the Dream Patrol. While there are several members seen, the regular heroes are Captain Zed and his partner P. J.

Compare Potsworth & Company and The Dreamstone, both contemporary shows dealing with similar themes.

Captain Zed: "Have a nice dream!"