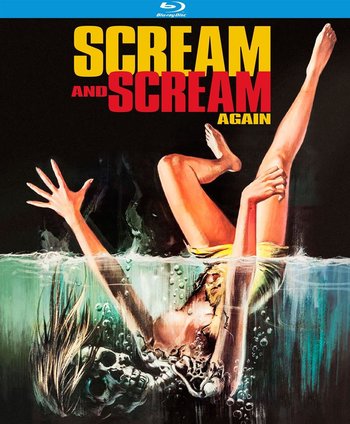 Scream and Scream Again is a 1970 British-American science fiction conspiracy thriller film starring Vincent Price, Christopher Lee, Alfred Marks, Michael Gothard, and Peter Cushing. It is based on the novel The Disorientated Man by 'Peter Saxon', a house pseudonym used by various authors in the 1960s and 1970s.

Strange and terrible things are afoot and the police are helpless to stop them. First a heart attack victim goes to the hospital and awakens to find limbs missing, and later, the body of a rape victim is found with two strange puncture wounds upon her wrist. Meanwhile in eastern Europe, a military officer is murdered by someone with inordinate strength. After another girl is murdered, Supt. Bellaver gets on the case. The trail of clues has many twists and turns and before he is led to the mysterious estate of Dr. Browning, another dies. There he discovers that the insane scientist has engineered a master race of emotionless, mindless beings as part of an international conspiracy. Now Bellaver and his cohorts must somehow stop the doctor and his friends from taking over the world.

Tropes in Scream and Scream Again: