Film / The Secret of the Dirk 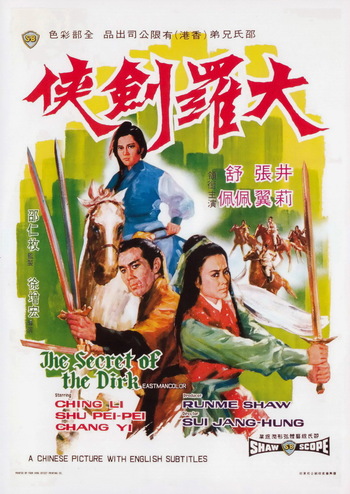 The Secret of the Dirk is a 1970 Shaw Brothers Wuxia film directed by Hsu Tseng-Hung (the same man behind the entire Temple Of The Red Lotus trilogy) starring Chang Yi.

When the notorious Bandit Chief Wang and his mooks raids the City of Liu, the inhabitants are forced to flee, but not before keeping all their gold and treasure hidden in a valley. A team of swordswomen led by Liu Ming-Chu (Ching Li) are looking for the hidden treasure box before the bandits can get their hands on it, but both parties will have to contend with the wandering swordsman Chou Ying-Lung (Chang) and his awesome, awesome unfoldable sword.

Secret of the Tropes: