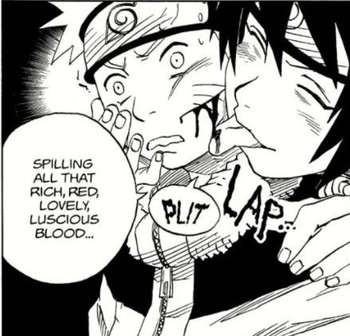 A character who has an odd fascination with blood, such as talking about how they wouldn't mind drinking it up, enjoying the sight of blood being spilled, etc. Often, they may be seen licking blood off of their weapons. Very often a sign of an Ax-Crazy character, but not always (as seen as in the picture). You still would be (probably) safer if you stay out of their sight, though.

In real life, licking a cut is an instinctive reaction — the saliva can help to clean the wound, on top of promoting growth of new skin cells. Anyone who've ever had a pet will probably have noticed the same behavior in them if they're ever wounded... and unless you deliberately suppress the instinctive reaction, licking or sucking on a minor cut is a perfectly natural response. So actually, most of us probably know what blood tastes like, without there necessarily being any fetishistic subculture involved. Please note, this can get you very sick.