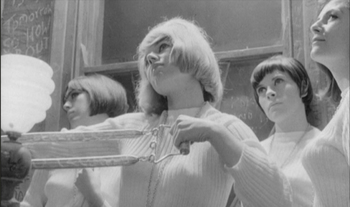 The Knack...and How to Get It is a 1965 British comedy film directed by Richard Lester, adapted by screenwriter Charles Wood from the 1962 play The Knack by Ann Jellicoe.

Colin (Michael Crawford— that's right, the guy from The Phantom of the Opera) is a generally nervous, sexually frustrated high school maths teacher in swinging '60s London. He is envious and jealous of Tolen (Ray Brooks), a drummer who is renting out a room in his house. Tolen is a highly successful Casanova who beds hot women by the score. Colin asks Tolen to teach him "the knack" for picking up babes, and Tolen gives him some (generally unhelpful) advice about being confident and dominant.

Meanwhile, Nancy (Rita Tushingham), an innocent, virginal young woman, has arrived in London for the first time, and is seeking a room at the YWCA. She wanders around in frustration for a while until she finds Colin and his friend Tom (Donal Donnelly), an artist who has just rented another room in Colin's house, struggling to move a cast-iron bed frame (Colin has acquired a bigger bed to facilitate sex with the ladies). Romantic sparks and madcap silliness ensue.