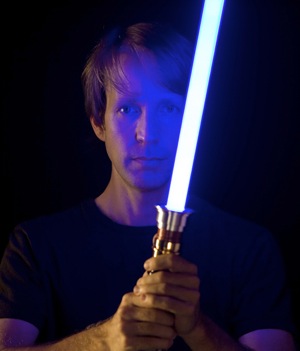 "This weapon is your life."
"Listen to James Arnold Taylor's trope page. This may be his last chance."
Advertisement:

James Arnold Taylor (born July 22, 1969 in Santa Barbara, California) is a voice actor in video games and film. He rose to prominence by providing English voice work in Square Enix's 2001 video game, Final Fantasy X as the game’s main protagonist, Tidus, a role he would reprise in all subsequent Final Fantasy media that featured the character.

James' other roles during this period include Ratchet in the Ratchet & Clank series (barring the original game), Leonardo from the 2007 TMNT film, Wooldoor Sockbat on the Comedy Central animated series Drawn Together, and voice-doubling for both Captain Jack Sparrow and Timon in Kingdom Hearts II.

Simply put, he is truly a Man of a Thousand Voices. You can hear him almost anywhere: from commercials to Western Animation and video games without you even noticing it.

Need an example of his acting range? Just check out this video

and prepare to be amazed.

Not to be confused with folk singer James Taylor.

Remember, the Force will be with you. Always.