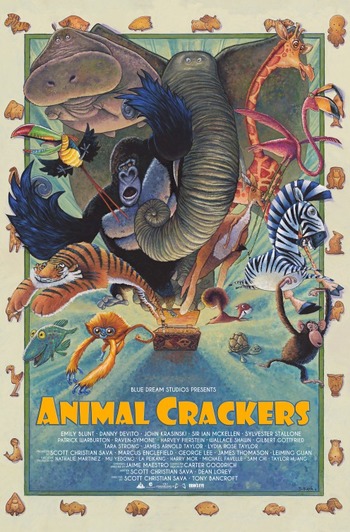 A magical adventure in every bite!
Advertisement:

The film revolves around Owen and Zoe Huntington (Krasinski and Blunt), a couple who's to working at Zoe's father Mr. Woodley's (Shawn) dog biscuit factory. Desperate for a change, fate soon arrives when they are inherited Owen's uncle's well-respected circus after he burns in a fire. Known for its amazing animals, the Huntingtons discover that a mysterious box of animal crackers that they were given is the secret to the circus's success, as the cookies turn the user into the animal they've eaten. All seems to be well, until Owen's other attention-seeking uncle Horatio (McKellen) plots to steal the magic box of animal crackers for himself, in a desperate attempt to take over the circus. It's now up to Huntingtons to unite its family of acrobats and clowns to stop Horatio, though it'll take more than a few circus tricks to stop him completely.

Despite screening at the Annecy Film Festival in 2017, the film wasn't released

The trailer can be watched here.

Not to be confused with the Marx Bros. comedy or the newspaper comic strip and its television adaptation.

Has a Characters page in progress. Please move character tropes there.