Film / Anna and the Apocalypse 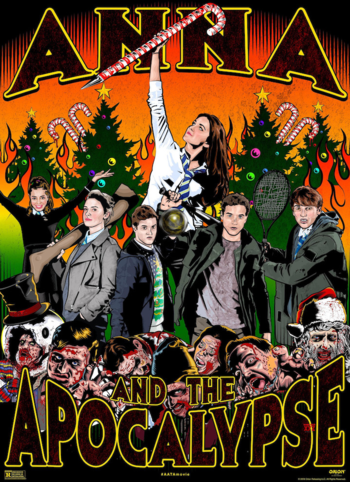 Anna and the Apocalypse is a British zombie horror Christmas musical comedy directed by John McPhail and starring Ella Hunt, loosely based on the 2011 short film Zombie Musical

by Ryan McHenry. Premiering at Fantastic Fest on September 22, 2017, to widely positive reviews, the film received a theatrical release in the US on November 30, 2018.
Advertisement:

During the Christmas season, a Zombie Apocalypse threatens the sleepy town of Little Haven, forcing Anna and her friends to fight, slash and sing their way to survival, facing the undead in a desperate race to reach their loved ones. But they soon discover that no one is safe in this new world, and with civilization falling apart around them, the only people they can truly rely on are each other…

The first trailer can be found here

; the second (red band) trailer can be found here

. The official "Hollywood Ending" music video can be found here

; the official "Soldier at War" music video can be found here

Anna was positively received by critics and audiences but failed at the box office. It has since developed a cult following.

While receiving an immediate home media release in the UK, the film was made available in the US on hulu in March 2019 before a Blu-ray release on December 2, 2019 through Second Sight Films, which contains bot the Festival Cut and the longer Theatrical Cut, along with the original short film "Zombie Musical". Apart from the two cuts of the film, the US had its own, shorter, cut.

Anna and the Apocalypse

A Christmas Musical with Zombies!

Anna and the Apocalypse

A Christmas Musical with Zombies!