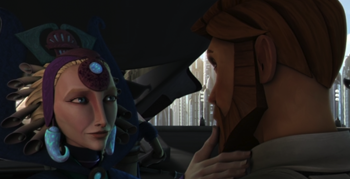 Obi-Wan and Anakin accompany Duchess Satine and a group of senators to Coruscant. However, SD-K4 assassin droids (along with their probe killers) have been planted on the ship, meaning that one of the senators is a traitor to the Republic...