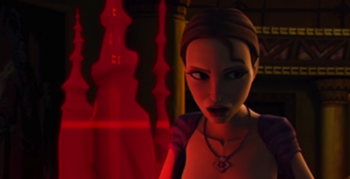 A true heart should never be doubted.
Advertisement:

Anakin Skywalker returns to Coruscant and heads straight for the home of his wife, Senator Padmé Amidala. The two of them are happy to finally spend an evening alone with each other.

Meanwhile at the Jedi Temple, the Council is suspicious of Senator Rush Clovis of Scipio, who has strong ties with the Intergalactic Banking Clan. They have asked Senator Amidala, who once had a close relationship with Rush when they entered the Senate together, to spy on Clovis but she has refused. They are trying to ask Anakin to speak to her, but he ironically has been ignoring their calls to spend time with Amidala.

Anakin finally heeds their summons and agrees to help with more than a little jealousy after finding out about the relationship between the two. He re-approaches Padmé, but is unwilling to allow her to approach Clovis again. They get into an argument and Padmé chooses to take the mission after all, partially out of anger at Anakin.

Padmé meets with Clovis in a senatorial café and learns that he is heading to Cato Nemoidia to deal with members of the Trade Federation. He invites her to come with her, hoping to rekindle their relationship.

As they board the transport to Cato Nemoidia, one of the pilots turns out to be a disguised Anakin along with R2-D2.

On Cato Nemoidia, Clovis and Padmé meet with the Trade Federation senator Lott Dod. The Banking Clan is indeed investing in a massive droid factory on Geonosis, the planet where the Clone Wars first began. After being shown to her room, Padme walks around the estate, where she nearly walks in on their meeting with Poggle the Lesser. She just misses getting a good look at the hologram of the factory and is escorted back to her room after by Clovis. Dod and Poggle plot to poison Padmé in order to use an antidote as leverage against Clovis for a greater share of the profits from the factory's operation.

At dinner, Dod spreads poison on the lip of a goblet before offering it to Padmé. After the meal, it starts to take effect. She shakes it off as Clovis sends C-3PO away to escort her around the grounds. As Threepio returns to their quarters, he runs into Anakin. During the tour, Padmé gets Clovis to bring her a drink as the poison continues to slowly affect her. She goes to the alcove where she saw Dod and Poggle speaking with Clovis and manages to reactivate the hologram, containing the coordinates of the factory, and take the hologram disc. Just as Clovis returns, followed shortly by an angry Anakin, Padmé collapses from the poison into Clovis' arms and is just barely able to get the holodisc to Anakin. Anakin gives the disc to Artoo and rushes back.

Meanwhile, Clovis confronts Lott Dod, who accuses her of being a spy. Clovis finds the disc missing and confronts Padmé about it, who readily admits to it. He tries to convince a newly-arrived Anakin to exchange the disc for Dod's antidote. Anakin forces him to help carry Padmé back to her ship. Confronted by Dod and his aides, Clovis pulls a blaster on the senator and forces him to give him the antidote. Anakin takes Padmé and the antidote onto her ship and takes off with the plans, leaving Clovis to face an angry Lott Dod.