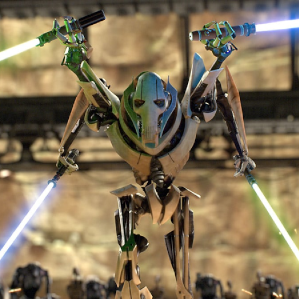 "Army or not. You must realize you are doomed."
Click here 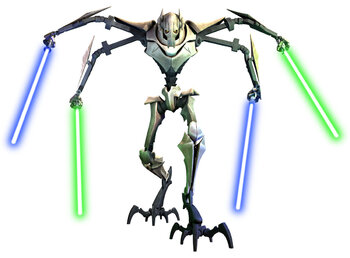 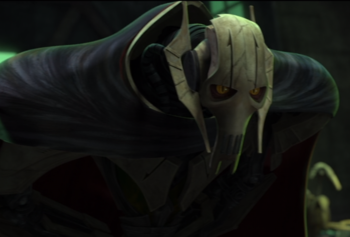 to see his Season 7 appearance
Advertisement:

Portrayed by: Matthew Wood
Appearances: Obi-Wannote Flashback | The Clone Wars | Age of Republic | Kanan | Son of Dathomir | Dark Disciple | Revenge of the Sith | Crimson Reignnote Flashback
"I'm no errand boy. And I'm not in this war for Dooku's politics! I am the leader of the most powerful droid army the galaxy has ever seen!"

Grievous, formerly known as Qymaen jai Sheelal, was a Kaleesh warlord who served as the Supreme Commander of the Separatist droid army that engaged the Grand Army of the Republic throughout the pan-galactic conflict of the Clone Wars. Noted for his ruthlessness and extensive cybernetic enhancements, Grievous inspired fear as he traveled across the galaxy, invading entire worlds and engaging the Jedi Knights of the Republic. While not Force-sensitive, Grievous had extensive training in lightsaber combat courtesy of Count Dooku, and this plus his cyborg body enabled him to fight the Jedi on even footing.