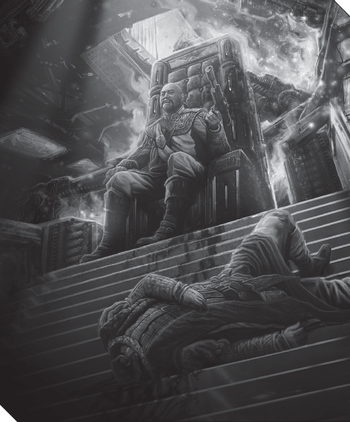 "You will fight to the last soldier, and when you die, I will call upon your damned souls to rise and speak horrible curses at the enemy."
"As a citizen of the Outworlds Alliance and a descendant of the Rim Worlders, I had hoped that in the course of our research on this volume I might find some mitigating factor to modify history's judgement of my most famous countryman. I regret to say that I have found none. As far as Amaris is concerned, the ancient slogan applies: Ig fallou blaos, dem ressensu glottuo. ('What you see is what you get,' or, literally, 'if you catch this, you will have to eat it.') Amaris may have been worse than even past historians have claimed."
— Anastasia Marcus, on Stefan Amaris, BattleTech: House Davion (The Federated Suns)
Advertisement:

Even in the world of tabletop gaming, there still exists some completely despicable villains. Below are some of the worst and most atrocious bastards ever to roam the table top. Hope you roll well.