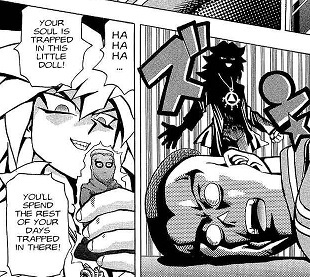 "Penalty Game! MIND DOLL!"
"I am a thief and a stealer of souls, and I have done terrible things in my quest to possess the Millennium Items. You DO remember the legends, don't you?"
—Yami Bakura, while possessing the real Bakura, to Yami Yugi, Anime Series, "Evil Spirit of the Ring"
Advertisement:

Yu-Gi-Oh! centers around a game where monsters are pitted against each other in card form. However, the worst monsters can be found even outside the cards.