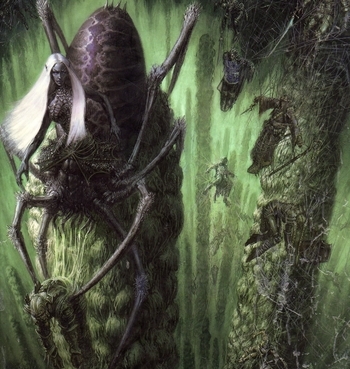 "Great Goddess, Mother of the Dark, grant me the blood of my enemies for drink and their living hearts for meat. Grant me the screams of their young for song, grant me the helplessness of their males for my satisfaction, grant me the wealth of their houses for my bed. By this unworthy sacrifice I honor you, Queen of Spiders, and beseech of you the strength to destroy my foes."
"Death to all who oppose Cyric. Bow down before his supreme power, and yield to him the blood of those that do not believe in his supremacy...[S]lay those that are weak, of good persuasion, or false prophets....[C]lergy of other faiths...are false prophets and forces who oppose the One True Way. Bring death to those that oppose Cyric's church...only Cyric is the true authority and all other authority must be subverted...[K]eep all folk afraid, uneasy, and in constant strife..."
— Dogma

Dungeons & Dragons, having been around since 1974, is the Trope Maker and Trope Codifier for the Tabletop RPG. It is thus no surprise that inhabiting the worlds within the multiverses are some utterly vile characters.

An entry under Tabletop Game doesn't mean they don't appear in other media as well. It simply means that their entry is located there as that's the main medium they reside in.